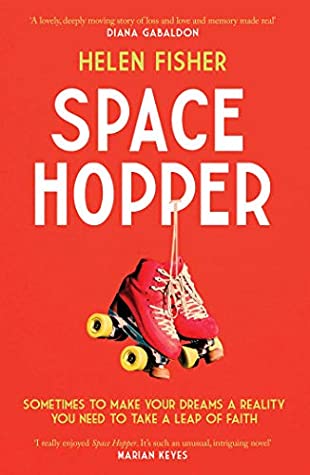 About the book…
This is a story about taking a leap of faith
And believing the unbelievableThey say those we love never truly leave us, and I’ve found that to be true. But not in the way you might expect. In fact, none of this is what you’d expect.

I’ve been visiting my mother who died when I was eight.
And I’m talking about flesh and blood, tea-and-biscuits-on-the-table visiting here.

Right now, you probably think I’m going mad.
Let me explain…Although Faye is happy with her life, the loss of her mother as a child weighs on her mind even more now that she is a mother herself. So she is amazed when, in an extraordinary turn of events, she finds herself back in her childhood home in the 1970s. Faced with the chance to finally seek answers to her questions – but away from her own family – how much is she willing to give up for another moment with her mother?Space Hopper is an original and poignant story about mothers, memories and moments that shape life
Buy Links:

About the author…
Helen Fisher spent her early life in America but grew up mainly in Suffolk, England, where she now lives with her two children. She studied psychology at Westminster University and ergonomics at University College London, and worked as a senior evaluator in research at the Royal National Institute of Blind People. Faye, Faraway is her first novel.
Contact Links:

Space hopper is one of the most moving, books about motherhood, love, family, memories and relationships I’ve read in a long time.   Faye, is a mother of two girls and is married to husband Eddie who is training to be a vicar. They have a close relationship and a happy life but Faye is quietly worrying about her future role as a vicars wife, will she be good enough, can she meet the expectations of what will mean a new role for her too?   Maybe it’s this that has unsettled her but finding a photograph of herself, transports her back 30 years, opening up a Pandora’s box of emotions. She lost her mother when she was only eight years old and has no recollection of her father, as an adult so many questions for her mother.

Faye finds a picture of her as a childhood sitting beside a Spacehopper box in front of a Christmas tree.  She still has the box from the picture, and it’s this that is pivotal in the story, she clings onto it as her link to the past which inadvertently does just that - transporting her back to her childhood taking me with her!  The story made me suspend belief, though it wasn’t a conscious thought at the time, I just did, probably because it’s such a nostalgic read that evoked so many memories of my own childhood - the descriptions, could have been Polaroid’s of my own childhood.

Faye was just eight years old, when her mother suddenly died, leaving a hole in her life that she’d found impossible to fill - she had so many questions she wished she knew the answers to. When she unexpectedly finds herself in the 70’s as an adult observing her own childhood she’s thrown off balance.  The story was disconcerting, scary, yet exciting and intriguing at the same time. When Faye is returned back to ‘real life’ the pain, heartbreak and the emotion Faye was feeling was palpable - it poured from the pages. The grief genuine and raw.

All kinds of thoughts rattled round my head as I read, was Faye dreaming, having lucid dreams or was she Time Travelling? Is it even possible I don’t know, but at the time of reading I didn’t question it.  Helen Fisher’s skill as a writer to present something so out of the ordinary and have me suspend belief, accept the theory and jump with Faye was just something else.

The pull of her life as a wife and mother and that of herself as an adult remembering her childhood, lost in the present, needing her mother was utterly heart breaking to read. To watch her torn between the past and the present, the deep aching love of her husband and children and that of her own need to know her mother was difficult to bear.  The dilemma and inner turmoil of being a mother but wanting to know more of her own mother, ruminating on the past but not able to settle in the present made the story edgy, sad and utterly heart breaking to read.

Faye wants to talk to Eddie about what is happening but can’t bear to add to his burden, he’s too close, emotionally attached and she knows - her face is an open book, she can’t hide her turmoil, she aware he is worried about her, but doesn’t know how to explain so Faye confides and leans on blind friend and colleague Louis, trusting him with her innermost thoughts. An independent person with no emotional attachment.  She trusts him to guide her, his blindness making him ultra sensitive, able to listen on a deeper level. They formulate a plan that culminates in one of the most emotionally charged endings to a book I’ve read.  Spacehopper was beautifully written, sensitive and is a story that raised so many questions, I want to read the story again with fresh eyes.  I loved this book, it was captivating, beautiful and emotive and have already recommended it to so many friends.