Shadow of a Doubt - Michelle Davies 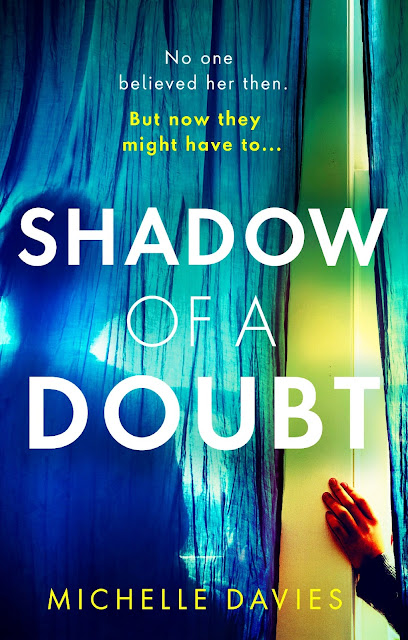 About the book….
Twenty-six years ago my brother was murdered in my family home.

I was sent to a psychiatric unit for killing him.

The whole world believed eight-year-old Cara killed her younger brother on that fateful night. But she blamed it on a paranormal entity she swears was haunting her house. No one believed her and after two years of treatment in a psychiatric unit for delusional disorder, Cara was shunned by her remaining family and put into foster care. Now she's being forced to return to the family home for the first time since her brother's death, but what if she's about to re-discover the evil that was lurking inside its walls?

‘Pure suspense, where past and present collide with chilling results. On every page, there's a sense that anything could happen.’ Erin Kelly

‘Suspenseful, chilling, with an underlying story that's tragic on many levels. Shadow Of A Doubt is an expertly crafted psychological thriller which grips from page one. Loved it.’ Amanda Jennings
Buy Links:
About the author… 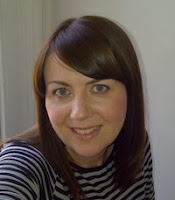 Michelle Davies was born in Middlesex in 1972, raised in Buckinghamshire and now lives in north London.

Her debut crime novel, Gone Astray, was published in 2016 and features Family Liaison Officer DC Maggie Neville as its central police character. Gone Astray was part of a two-book deal with Pan Macmillan and the follow-up, Wrong Place, also featuring Maggie, is out now. Her third in the series, False Witness, is due out in July next year while a fourth will follow in 2019.

When she's not turning her hand to crime, Michelle writes as a freelance journalist for women's magazines including Marie Claire, YOU and Stylist. Her last staff job before going freelance was as Editor-at-Large at Grazia and she was previously Features Editor at heat. She began her career straight from school at 18, working as a trainee reporter on her home-town newspaper, the Bucks Free Press
Contact Links:

Shadow of a Doubt is a psychological thriller by Michelle Davies.   From the prologue until the very last chapter a fog like heaviness sat on my shoulders, a weight that I couldn’t lift.  Throughout the book there were brief moments where I thought the fog was lifting only for it to push down harder, Intensifying the sick like feeling in the pit of my stomach, the nervous tension stayed with me throughout.
At the heart of Shadow of a Doubt is a family whose lives were torn apart after eight year old Cara is torn from the family home accused of killing her younger brother - something that twenty five years later she still vehemently denies - it wasn’t her it was “Limey-Stan” a well known local from the past!
The story is told in three parts centred around Cara’s life as a child and today when the bottom falls out of her world again, summoned from the life she has made for herself back to the family home she hasn’t seen in twenty five years.  It is told from from two angles, that of Cara and her mother Anita.  Understandably the summons back to her childhood home sends her into turmoil and blind panic, her anxiety levels palpably lift off the pages and hover in the air around me as I read.  Her extended family, a family that cut her out of their lives aren’t happy either that Anita, Cara’s mother has insisted she returns and make their feelings on the subject crystal clear.
The layers of Cara’s life are lifted and presented to the reader through various mediums, memories, real life, newspaper articles and medical reports.  To say the journey back to Heldean was a difficult one for Cara would be an understatement.  The author has created a character in Cara that is difficult to warm to despite everything she had gone through, the rejection by her family, brought up in a foster home albeit with love and kindness, what we know of her life as both a child and an adult.  Understandably, her experience made her build walls around her that are difficult to penetrate or has she always been like that?  Cara’s character got under my skin, she isn’t a person that I am drawn to, she has spikey edges as an adult that are clear to see, she keeps people at arms length and the insight into her mothers life in Part 2 of the book makes me question is it nature or circumstances that have shaped her character so much - not everything is quite what it seems, her world was spun on its axis
Throughout the telling of her story I felt utter despair, fear and anguish for her, pity even. The lines of reality and imagination constantly blurred and as the story progressed I was compelled to read quicker and quicker, the need to shake the uneasiness and dread I felt, the turmoil inside was at times almost unbearable. The questions going round my head, the second guessing was continuous.
Michelle Davies’ writing style is something else, the story possessed my feelings from start to finish, chilling me to the bone, I have absolutely no hesitation in recommending this book to everyone, it is one of the best psychological thrillers I have ever read and I’m going to be drumming my fingers waiting for her next.  Thank you to Orion for the early read.
Follow the tour: 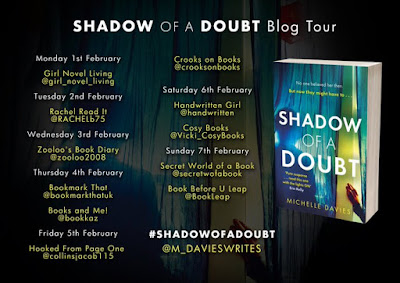