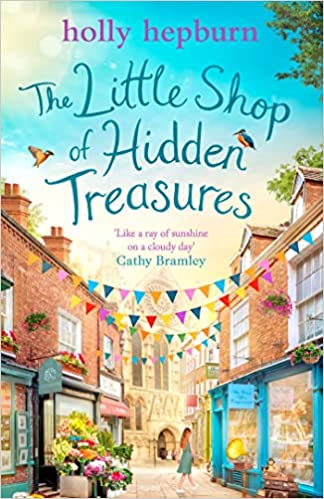 *The brand new novel from Holly Hepburn, perfect for fans of Cathy Bramley and Katie Fforde.**
Originally published in four parts this is the full story in one package.

When Hope loses her husband, she fears her happiest days are behind her. With her only connection to London broken, she moves home to York to be near her family and to begin to build a new life.

Taking a job at the antique shop she has always admired, she finds herself crossing paths with two very different men. Will, who has recently become the guardian to his niece after the tragic death of her parents. And Ciaran, who she enlists to help solve the mystery of an Egyptian antique. Two men who represent two different happy endings.

But can she trust herself to choose the right man? And will that bring her everything she really needs?
Buy Links:
About the author…
I’ve wanted to write books for adults for as long as I can remember but I was too scared to try. One day I decided to be brave and dipped a toe into the bubble bath of romantic comedy with my first novella, Cupidity, and I’ve never looked back. I often try to be funny to be funny, except for when faced with traffic wardens and border control staff. My favourite thing is making people smile.
I’ve tried many jobs over the years, from barmaid to market researcher and I even had a brief flirtation with modelling. These days I am mostly found writing.

I live near London with my grey tabby cat, Portia. We both have an unhealthy obsession with Marmite.
Contact Links:
Twitter: @HollyH_Author
Website: http://hollyhepburn.com
My thoughts…

After the biggest reading slump I’ve ever known we entered a new year and I was determined to read a book from start to finish.  My first read of 2022 was The Little Shop of Hidden Treasures by Simon & Schuster author, Holly Hepburn.
Where can I begin, I read it cover to cover over two days and what a belter - it was exactly what I needed to kick start the year and get me reading again!  The story revolves around Hope and The Ever After Emporium, a shop that has intrigued and enchanted Hope since she was a small child.
Hope has moved to York from London to be nearer to her family.  She was devastatingly widowed two years previously before being made redundant - she is lost and directionless, and as a reader she comes comes across as hollow and empty, I could feel her pain, and visualise her face and body language as clearly as if she was stood next to me.  You could tell she really was just going through the motions, nodding in the right place to appease her family, who clearly mean well but don’t really get where she’s at.
When Hope finds herself outside The Ever After Emporium she’s instantly transported back to her childhood, remembering the times she gazed whilst-fully through the window as a child in at an Aladdin’s Cave of eclectic artefacts and treasures.  As I read, I was transported to York - which is my most favourite City to visit by the way, to the Imaginarium a shop that is just exactly the same, an Aladdins Cave of interesting and different objects that you didn’t realise you needed in your life until you saw them in the shop.  I can lose hours in that shop!
Hope found herself applying for a part-time job that was advertised on a card in the window, thinking it would be perfect whilst she got her life back on track, although she did talk herself out of it thinking herself not suitable at one point, before suddenly we find she’s in the shop talking with the owner Mr Young and the next thing employed.  She hoped her family would see this as a positive step forward in rebuilding her life.
The story centres around a spectacular piece of treasure that has been hidden for 90 years and is discovered by Brodie, the small niece of Will, a local jeweller.  Brodie also loves to visit the store and is as mesmerised by the contents as Holly was and she absolutely melted my heart!
Holly is tasked by her new employer with uncovering the history and true ownership of the treasure Brodie found.  As a reader, I virtually packed my bags and joined Hope on a romantic journey of discovery as we were transported between Egypt and York.  The past and present colliding as we pieced together a jigsaw that did more than pull at my heart strings. A story that was desperate, sad yet hopeful and alive - I just loved it and was totally absorbed. Hope was able to distract herself from her own situation because she was so engrossed in solving the mystery - it came at a time that was exactly right for her and at the same time she started to make some new friends in the other shopkeepers too.  It really was just lovely to see her filling out, moving beyond her initial empty shell like state, growing in confidence and stature and finding herself caught up in romance by not one but two very different men.
This story demonstrates how at certain times in our life, when we’re dealt a poor hand we have a choice. sink or swim, usually your gut instinct is the right one and that it’s ok to accept support and friendship whilst you pick yourself up but should then be given the space to make your own decisions. As in this book, time, quiet and space will usually allow for balanced decisions - none of us benefit from being told what to do. I felt an emotional attachment to Hope and rooted for her throughout, her voice wasn’t loud enough to fight for her self at times, drowned out by the white noise around her but she is a strong character and I willed her to take back control which she does with panache.

An absolutely wonderful read, that is uplifting, heart warming and hopeful. The hurt, intrigue and romance is heartfelt, the friendships strong and watching Hope emerge and fly like a butterfly was just lovely.
Follow the tour: 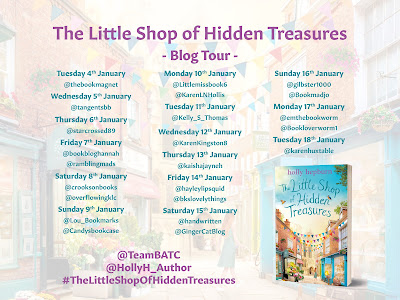 Posted by Crooks on Books at 19:58 No comments: