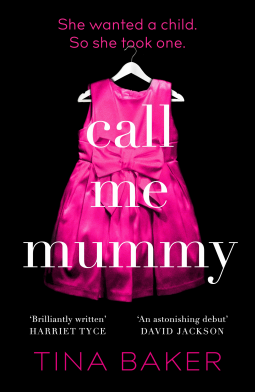 About the book…
Glamorous, beautiful Mummy has everything a woman could want... except for a daughter of her very own. So when she sees Kim—heavily pregnant, glued to her phone and ignoring her eldest child in a busy shop—she does what anyone would do. She takes her. But little foul-mouthed Tonya is not the daughter that Mummy was hoping for.

Meanwhile Kim is demonised by the media as a 'scummy mummy', who deserved to lose Tonya and ought to have her other children taken too. Haunted by memories of her own childhood and refusing to play by the media's rules, she begins to spiral, turning on those who love her.

Though they are worlds apart, Mummy and Kim have more in common than they could possibly imagine. But it is five-year-old Tonya who is caught in the middle.
Buy Links:

About the author…
Tina Baker, the daughter of a window cleaner and fairground traveller, worked as a journalist and broadcaster for thirty years and is probably best known as a television critic for the BBC and GMTV. After so many hours watching soaps gave her a widescreen bum, she got off it and won Celebrity Fit Club. She now avoids writing-induced DVT by working as a Fitness Instructor.

Call Me Mummy is Tina's first novel, inspired by her own unsuccessful attempts to become a mother. Despite the grief of that, she's not stolen a child - so far. But she does rescue cats, whether they want to be rescued or not.
Contact Links:

Where do I even begin! Call me Mummy is a debut novel by Tina Baker and she has knocked the ball right out of the park with this one!

Call Me Mummy begins when harassed, heavily pregnant mother Kim is out shopping with her children, daughter Tonya and son Daryl.  She’s clearly a little rough around the edges, the way she speaks to them and her utter disregard for their care and safety seems apparent.  Tonya wanders off whilst mum is on the phone and by the time Kim realises she’s missing Tonya has been walked out of the store by ‘Mummy’ a person we find is from a privileged background, that has everything except the one thing she really wants - a child.  She watches Kim and sees Tonya as a gift, a child she sees as needing to be rescued from her awful mother! As mothers they appear to be polar opposites.  How little she knew at this point - Tonya doesn’t live up to ‘mummy’s’ expectations of how a child should behave at all.

There was so much to absorb in this story, it was utterly compelling from the start, the characters were obviously flawed and complex.  I desperately wanted to find out what made them tick, what was their back story? From almost the beginning it was clear that ‘Mummy’ was struggling with some sort of mental psychosis.  She was damaged in some way and definitely had no experience of caring for a  child. Her ideal of how a five year old should behave was so far from the mark it was ridiculous and Kim’s hard nut shell that she’s created for herself is clearly a protection of sorts - she lives up to the image people see to protect herself from her past.

The narrative flicks back and forth with chapters told from both Kim and Mummy’s prospective,  both now and back to their childhoods interspersed with thoughts and outpouring from Tonya.  It made for incredibly difficult reading. Neither woman would be up for a mother of the year award, what had happened in their past to make them the people they were today was a question I asked over and over again throughout the whole book and as the author dropped snippets of information the pictures that developed made hard reading.  The children we were, become the adults we are, sprang to mind, life really does perpetuate and it’s difficult to break out of a mould.

The author painted pictures with words so vivid I could have been hovering above the characters as the story played out before my eyes, such were the descriptions, it was at times like living inside a never ending nightmare. Some sections were so difficult to read I kept having to put the book down, all the while muttering and cursing under my breath.  The tension and anxiety in reading Call Me Mummy was almost too much to bear! The pictures conjured in my mind couldn’t be cleared even when I closed my eyes.

Tonya it seemed really had dropped straight out of the frying pan into the fire.  What are the chances of two mummy’s both baring horrific scars from their childhood? Both with deep rooted emotional and physical issues, thank goodness for Tonya spark - her little flashes of temper and her resilience was testament to the upbringing she’d had in her short five years.

Call Me Mummy was a gripping, intense, dark, bitter, twisted and emotional read. I felt sick to the stomach and at times found myself reading quicker and quicker to try and end the nightmare for all three main characters - Kim, Tonya and Mummy.  I transitioned through every emotion as I read and at times the lump in my throat was so large it was painful.  The emotional, physical and mental damage of all the characters was immense and difficult in parts to read.  I felt utter despair and my anxiety was through the roof and yet at times it’s difficult to believe there were light frivolous moments that lifted the mood and were at total odds with the situations. This was a story that no matter what the ending was going to have consequences for all the characters.

All in all this was an exceptional read that will stay with me for a long time to come.  A book I will recommend forever and a day!