Both of `You - Adele Parks 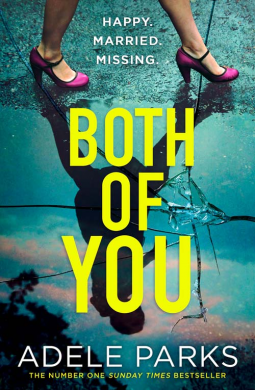 About the book…
Leigh Fletcher: happily married stepmum to two gorgeous boys goes missing on Monday. Her husband Mark says he knows nothing of her whereabouts. She simply went to work and just never came home. Their family is shattered.
Kai Janssen: married to wealthy Dutch businessman, Daan, vanishes the same week. Kai left their luxurious penthouse and glamourous world without a backward glance. She seemingly evaporated into thin air. Daan is distraught.

DC Clements knows that people disappear all the time – far too frequently. Most run away from things, some run towards, others are taken but find their way back. A sad few never return. These two women are from very different worlds, their disappearances are unlikely to be connected. And yet, at a gut level, the DC believes they are.

How could these women walk away from their families, husbands and homes willingly? Clements is determined to unearth the truth, no matter how shocking and devastating it may be
Buy Links:
About the author…

Adele Parks was born in Teesside, NE England. Since graduating from Leicester University, where she studied English Language and Literature, she’s worked in advertising and as a management consultant. In 2010 she was proud to be awarded an honorary doctorate of Letters from Teesside University.

She’d always dreamed of being a writer and her first novel - Playing Away - was published in 2000; that year the Evening Standard identified her as one of London’s ‘Twenty Faces to Watch’, which was very nice of them!

She likes to keep busy and is pretty flattered when she’s described as one of the most-loved and biggest-selling women’s fiction writers in the UK, (who wouldn’t like that?!) 4 million copies of her UK editions have been sold and have been translated into more than 30 different languages. This is her 21st novel, previous include the number one bestsellers Lies Lies Lies and Just My Luck. All her novels examines issues that are important to us all. She likes to scrutinize our concepts of family, our theories on love, parenting and fidelity with (I hope) honesty and humour. Whatever period she sets her novels she’s known for examining the thorny issues of the lives people lead with my trademark, up-front, tell-it-as-it-is style.

During her career she’s lived in Italy, Botswana and London. Now lives happily in Guildford, Surrey with her husband, teenage son and cat.

Read more about her life and books on her website.

Contact Links:
Twitter: https://twitter.com/adeleparks
Website: https://www.adeleparks.com/
My thoughts…
Both of You is a novel that is dark, chilling, claustrophobic and unnerving in equal measures.  We join the story as an unknown woman wakes chained to a radiator in an airless, concrete floored  room. Her anxiety and confusion set the tone for the subsequent encounters with her, but who is she and why is she there? What an opener, who is she? Within days we find not one but two local women have been reported missing bu their husbands.
The author introduces us to Leigh and her family, the reader very quickly learning that Leigh, second wife of Mark and step-mum to Seb and Oli was having a hard time of it at home, the boys who she had nurtured and loved for the past ten years since marrying their father after a whirlwind romance are growing away from her.  Elder son Oli in particular had become withdrawn and quite mean in his comments - she was sad and the aching hole their withdrawal had created was palpable, her sadness peeled off the page. Her sadness was evident especially as she was clearly happy to send them off for a week visiting Mark’s family, happy for the time and space to just be.  However, when the trio returned there was no sign of Leigh and my brain instantly went into overdrive, had she left them or was she the woman chained and confused, had she been abducted, if so why and by whom?
Mark was at a loss, his equilibrium clearly shattered without Leigh in the place she should be, dependable by his side when he and the boys returned home.  He reported her missing, his pain and helplessness at odds with his mindset that she was just away working - not able to fully accept that she really could be missing.  Within days we hear that a second person Kai Jannsen has also gone missing.  The two women are polar opposites in character, style and wealth - there doesn’t appear to be anything to link the two other than when they disappeared.  Everything feels a bit odd, not helped by the police officers attitude and demeanour - they were detached and remote, distant and didn’t seem to be taking their disappearances overly seriously.
I was hooked, I needed to mentally find them, turning the pages at a rate of knots to try and get some traction on the thoughts swimming through my mind.  Clues hung tantalisingly out of reach, moving just that little bit further away as I grabbed for them. For every small clue I thought I’d un-covered I had dozens of questions - it was like trying to do a jigsaw that someone had hidden away half the pieces. I just couldn’t find the link or connection.
The story was expertly layered with multi-faceted characters that all had the potential to be at the heart of the women’s disappearance, I second guessed every word, and played back each scenario in my mind, second guessing and doubting everything both written and imagined. The pacing, measured and steady building until the clues started slotting into place.  I found myself muttering and explaining out loud, exclaiming “why did I not see that” when I realised just how many clues were hiding in plain sight. They were so subtle and obvious when I realised but they didn’t even come close to hitting my radar.
This really was a book that was gripping to the very end, Adele Parks turns family life and dynamics on it’s head - I’m so happy and relieved to be living my quiet, suburban life but so was Leigh - wasn’t she?  An intricately woven tale that is so far removed from every day life but so very very plausible, yet shocking and beyond belief.  A totally compelling and addictive read.
Posted by Crooks on Books at 21:24