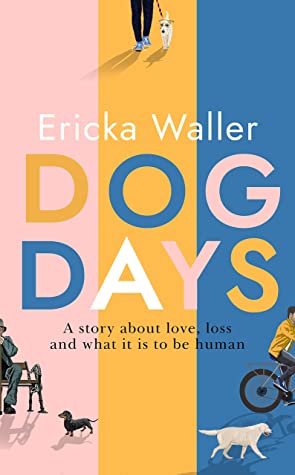 'DOG DAYS is a Russian doll of a book that twists and tugs each outer husk, revealing delicate and poignant inner layers. Irascible old bastard George, with the soft core of a Scotch egg; Dan, a shy counsellor who keeps his jazz hands firmly lowered; Lizzie, a fragile, fact-loving mother weighed down by scars and secrets. It's a soulful, lyrical tale that brings them - and their dogs - together in a satisfying whole. Such a treat.' - BETH MORREY, author of SAVING MISSY

George is very angry. His wife has upped and died on him, and all he wants to do is sit in his underpants and shout at the cricket. The last thing he needs is his cake-baking neighbour Betty trying to rescue him. And then there's the dog, a dachshund puppy called Poppy. George doesn't want a dog - he wants a fight.

Dan is a counsellor with OCD who is great at helping other people - if only he were better at helping himself. His most meaningful relationship so far is with his labrador Fitz. But then comes a therapy session that will change his life.

Lizzie is living in a women's refuge with her son Lenny. Her body is covered in scars and she has shut herself off from everyone around her. But when she is forced to walk the refuge's fat terrier, Maud, a new life beckons - if she can keep her secret just a while longer...

Dog Days is a novel about those small but life-changing moments that only come when we pause to let the light in. It is about three people learning to make connections and find joy in living life off the leash.
Buy Links:

About the author…
Ericka Waller is 38 and lives in Brighton with three daughters, too many pets and a husband.

When not writing she can be found walking her dogs, reading in the bath or buying stuff off eBay. Dog Days is her first book.
Contact Links:

Dog days evolves around the lives of three central, but very different characters, each accompanied by a furry friend.  There’s George a relic of years gone by, suddenly widowed just eight days previous, left alone with only Poppy the puppy his wife Ellen brought home against his will just before she passed. Dan a singleton, he’s never had a relationship, suffering with severe anxiety and OCD, he works as a counsellor, yet lacks confidence in himself and lives alone with Fritz his faithful friend. Lastly there’s Lizzie, we meet her just after she arrived at a women’s refuge with son Lenny. She’s befriended by Maud, the rather rotund Jack Russell who resides at the refuge.

At first read it was difficult to see what linked each of the characters, on the face of it they were three very different people, at different times of their lives and with very different stories to tell. But, actually as their stories unfolded they were very similar.  Each had difficulty expressing themselves, each was troubled in some way and internalised their pain, hurt and anguish, whilst externally wearing a mask and cloak, projecting images they thought would protect them and deflect attention from themselves.

Ericka Waller takes the reader on a journey as she delved into the lives of each of the characters.   The characterisations were insightful, at times very raw and emotional.  George was on the surface a belligerent, rude, ungrateful old man, none more so when head of the Neighbourhood watch, Betty literally barges in and tries to take control - pulling him back into life kicking and screaming - he’s not a bit grateful and makes his feelings known.  Dan’s life was ticking along quite nicely, that is until new client  Atticus walks in, his life from that point on tilts on an axis - he’s torn between ethics and the enticement of wanting to know more about him.  Then there’s Lizzie, she’s almost mute, not sharing her story, not letting anyone in or engaging until by chance she encounters Luke and his dog Wolfie when she had been forced out to walk Maud the refuge centres dog. In Dog Days the author didn’t hold back - the characters lives were entwined in some hard hitting scenarios and situations - the intense pain, hurt and anguish of grief, miscarriage, abuse and self harm, relationships, and the anxieties and complexities of a coming out to family as gay. It’s fair to say as the novel progressed all the characters were driven out of their comfort zone.

At the same time the author got the pacing of the book absolutely spot on. I loved the ebb and flow of all the characters as they gained strength, faced their fears head on and crept forward with life. Analogies and dry wit tempering the difficult words delivered at just the right moment. The more I read, the more questions I had rattling round my head, as the characters led my emotions on a merry dance. There are some incredibly funny, laugh out loud moments that made me smile whilst reading, that tempered with some incredibly moving and absolutely beautiful yet heart breaking scenes too. There are characters that were larger than life such as Betty who made me smile just by reading her name. She was a tonic and when I got to read her back story my heart broke in two.

This is such a beautifully written book, the descriptions evoked such vivid images, it would be incredible if it was made into a film. I read Dog Days over a ten day period and seriously believe to have whistled through it would not have been good.  Time was needed to think and absorb each of their stories, not to have would have meant skirting round the issues and that wouldn’t have been fair.  The words out of reach, beyond the pages were equally as important to take the time to consider. In case you haven’t guessed I absolutely loved this book which is one of the reasons it’s taken me so long to get my thoughts down on paper, I wanted to do it justice and hope it inspires others to pick up a copy too.