The One Saving Grace - Julie Houston 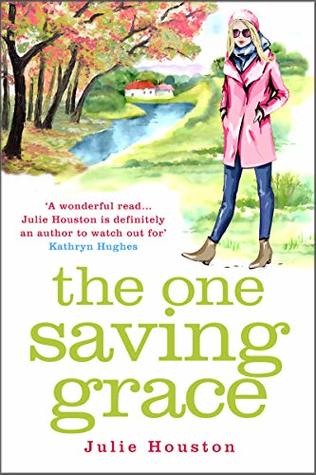 Lowering her voice so that the three police officers couldn’t hear, Grace whispered, ‘Harriet, could you just moan a bit more confusion, perilously clinging on as the chain of events threatens not only their comfortable, ordinary lives but also their very existence…

The One Saving Grace continues the story of Grace, Harriet and Amanda begun in Goodness, Grace and Me which reached #1 in Amazon’s Top 100 for Humour in 2014. 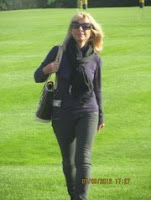 Julie Houston is Yorkshire born and bred. She lives in Huddersfield where her novels are set and her only claims to fame are that she taught at ‘Bridget Jones’ author Helen Fielding’s old school, her neighbour is ‘Chocolat’ author Joanne Harris and her friend is about to marry Tracy Emin’s cousin! Oh, and she was rescued by Frank Bough when, many years ago, she was ‘working as a waitress in a cocktail bar’ at the Kensington Hilton in London.

After University, where she studied Education and English Literature, she taught for many years as a junior school teacher. As a newly qualified teacher, broke and paying off her first mortgage, she would spend every long summer holiday working on different Kibbutzim in Israel. After teaching for a few years she decided to go to New Zealand to work and taught in Auckland for a year before coming back to this country.

She now teaches part time, and still loves the buzz of teaching junior-aged children. She has been a magistrate for the last thirteen years, and, when not distracted by ebay, genealogy (so time consuming but so interesting - she recently discovered her husband is descended from the poet Shelley and the Duke of Milan!!) and crosswords, she spends much of her time writing.

Julie is married, has a nineteen-year-old son and sixteen-year-old daughter and a mad cockapoo called Lincoln. She runs and swims because she’s been told it’s good for her, but would really prefer a glass of wine, a sun lounger and a jolly good book.

I have to confess straight off, I am a 'cover tart' and I absolutely love the cover for this and Julie's last novel Goodness, Grace & Me - they make you want to pick them up to start with.

This book gets off to a hilarious start that had me laughing and cringing in equal measures - never again will I be able to visit Harvey Nicks without a detour to the mens 'smalls dept' for a giggle.  Harriet, the lead female in this novel and her best friend Grace are  both expecting, due within weeks of each other.  They are on a little shopping trip when Harriet goes into premature labour - she's not due for another two months!  What ensues is nothing short of 'Comedy Gold'.  The two women spark off each other with an ease that is only seen with long term friends - add to the mix a drop dead, gorgeous, hunk of a knight in shining armour and a couple of scrapes with the law, as the girls try to execute an escape back to Yorkshire from Manchester wanting the babies (she's expecting twins) to be born on home turf, was like a scene from 'Thelma and Louise'.  If I tell you I sat grinning like a slightly insane person, laughing out loud regularly and you've got the measure of this book from the off.

The story really begins to split into two once the babies for both women are born.  Harriet's twins make five children for her with Grace giving birth to her first.  Julie describes with ease, two very different reactions to pregnancy and birth, one had no real plans, was very laid back and the other had the pregnancy, birth and post labour organised down to the last detail.  Suffice to say life isn't easy for either of the women, Grace's plans go by the wayside and Harriet needs an extra 12 hours in every day just to stay on top of day to day life - they begin to drift apart without realising it, their friendship stretched beyond recognition in the end.

It's clear to the reader that Grace is suffering from Post Natal Depression, something that best friend Harriet doesn't even realise for a long time because she literally doesn't have a minute left in her day for anything other than grabbing a few minutes sleep.  Such a serious topic could so easily have dragged the mood down but Julie deals with it in a sensitive but realistic way, balancing it with snippets of humour usually caused by Harriet's chaotic household.

What I wasn't prepared for, was the other storyline.  Harriet and Nick live happily with their brood of five, they clearly adore each other but neither has any time - Nick is always travelling with work, trying to build his business as security for his family and poor Harriet is worked to the bone.  As one day ends, the next instantly begins - the clock ticking faster than she'd like, there are simply not enough hours in the day.  The scene has been set so when Harriet finds herself locking eyes with the hunk from Harvey Nicks, in her living room of all places, she goes into a melt-down. Such was Julie's description I could literally feel the attraction fizzing off the page.

Julie introduced a supporting cast of family, friends and relations that read like a page from Ancestry.Com - everyone was seemingly connected or related to each other in some way - so and so's brother's, sister's, mother's, uncle that married .... You get the picture?  I thought I'd never keep up but it all slotted together, surprisingly quickly I'm glad to say and there wasn't a single one that I thought was un-necessary to the plot.  Some I liked more than others, but that's real life isn't it?

There are many twists and turns, things don't always happen as you'd expect and some things were definitely not as clear cut as I initially thought.  It's this and the pacing that kept me turning the pages - wanting to see if my guesses were right (they mainly weren't). Both women reached rock bottom before they could climb back up and re-build their lives - many relationships were shattered along the way some irretrievably and it was difficult at times to see how there could be any positive outcomes at all. I thought Julie bravely, but sensitively dealt with both the post natal depression and the infidelity in such a way that the reader is left in no uncertain terms as to the wider ripples caused by both.  I was left thinking and analysing long after the final page.  This wasn't your classic happy ever after chick lit, girl meets boy, falls in love, runs off into the sunset.  It was a million times better than that - because it was about real life and real life isn't all hearts and roses every day.  We get up in a morning and don't know what curve balls are coming our way.  One thing Julie demonstrated particularly well, is that the grass isn't always greener on the other side and time is a great healer.  We cannot force issues, people heal and build themselves back up at their pace and in their own time and only they know if they can move forward or need to take a different path.  But , true love runs deep and if you love someone you have to let them go - if it's meant to be, they'll come back.

This book is the authors second novel but can easily be read as a stand alone.  I loved it, even if I did get a bit confused at times ;D - there are some truly hilarious moments amongst the serious bits, Julie has brilliant comic timing and some of her terminology was hilarious.  I'd love to know who her characters were based on and how much of herself is in this book.