The Girl On The Train - Paula Hawkins 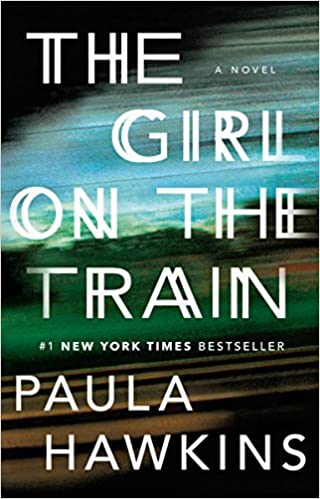 About the book....
A debut psychological thriller that will forever change the way you look at other people's lives.
Rachel takes the same commuter train every morning. Every day she rattles down the track, flashes past a stretch of cozy suburban homes, and stops at the signal that allows her to daily watch the same couple breakfasting on their deck. She’s even started to feel like she knows them. “Jess and Jason,” she calls them. Their life—as she sees it—is perfect. Not unlike the life she recently lost.
And then she sees something shocking. It’s only a minute until the train moves on, but it’s enough. Now everything’s changed. Unable to keep it to herself, Rachel offers what she knows to the police, and becomes inextricably entwined in what happens next, as well as in the lives of everyone involved. Has she done more harm than good?
A compulsively readable, emotionally immersive, Hitchcockian thriller that draws comparisons to Gone Girl, The Silent Wife, or Before I Go to Sleep, this is an electrifying debut embraced by readers across markets and categories.
About the author....
Paula Hawkins worked as a journalist for fifteen years before turning her hand to fiction.
Born and brought up in Zimbabwe, Paula moved to London in 1989 and has lived there ever since. The Girl on the Train is her first thriller.
Buy links...

There was a quite a buzz going on in anticipation of this book, the proof copies had brilliant covers, a true marketing genius - I just knew I had to get my hands on one and read it before its launch on January 15th 2015. Although, I usually find that a book doesn't entirely live up to all the hype, falling short in some small way - too long, too short, not liking the characters or the plot too easy to unravel - not in this case! The Girl On The Train has to be one of the most brilliant books I've read in a long time - I started it one evening, had visitors and was just willing them to go so I could carry on reading - eventually finishing it at gone half past two in the morning.  I literally could not put it down. Then I couldn't go to sleep, my mind was buzzing, going back over the plot, trying to pick out the clues I'd missed - one small problem, I was on a days first aid course at 9.30 the next day and after very little sleep turned up five minutes late and knackered

The story is told from three peoples perspectives, Rachel, Megan and Anna.  Each chapter told by one of the women, some chapters written in the present others going back in time.  Rachel is the lead character, who commutes to London on the same train, day and night, with the train always stopping for signals at the same place each day - allowing her to glimpse into the houses that back onto the train line.  Each chapter is like a series of polaroid pictures that have been jumbled up, some don't even belong in the pack.

Paula uses the voices of the women to narrate a story that is packed so full of twists and turns it is unclear what is fact or fiction or what really is meant to throw us off the scent until the final few pages.  Reading this book was like trying to look through the clouds, every time they appeared to be clearing and I thought I had a handle on the plot another storm brewed and it was like a hurricane had landed.  Time to sift through the debris again.

Nothing, including the three women is what it seems, their lives are intrinsically woven together by a common denominator - but how?  Dreams, perceptions, reality and  memories are melded together with everyday issues such as infidelity, marriage, death, divorce, infertility, alcoholism and ultimately murder.  Add to that the neurosis and trauma that comes with each of them - yet these sub stories aren't what the story is about, but they do impact upon and influence the story.  It really is no wonder my mind wouldn't switch off! The same story told by different people also adds to the cauldron of life as Rachel knows it.

The pacing of the book for me was just perfect, a bit like a train, slowing to allow the clues to be given and speeding back up so as not to give me quite long enough time to decipher them, Paula created characters that evoked many emotions and feelings, that changed throughout the book - nobody and nothing was what they seemed, three perfect examples of putting a face on for the world - once the guards went down the true characters emerging.    I went full circle with the lead character Rachel many times, from ambivalent, to strong dislike then pity and round we went again and again until I understood her and her story. I didn't really feel anything for Megan for most of the book and initially strongly disliked Anna, thinking her as arrogant and manipulative.  Behind every one of the women, there are other characters that impact upon their behaviour and characteristics - nurture or nature is a question I've asked myself many times as over a week after reading this book I am still trying to make peace with the story.

This book is quite simply a work of art, the longer you study it, the more emerges from the story - it's impossible to believe this is a debut novel and I cannot wait for book 2.  Paula Hawkins I'm sure will be an author I'm reading for many years to come.  I highly recommend you order this book now - don't be the one person amongst your friends who hasn't read.
Posted by Crooks on Books at 22:43