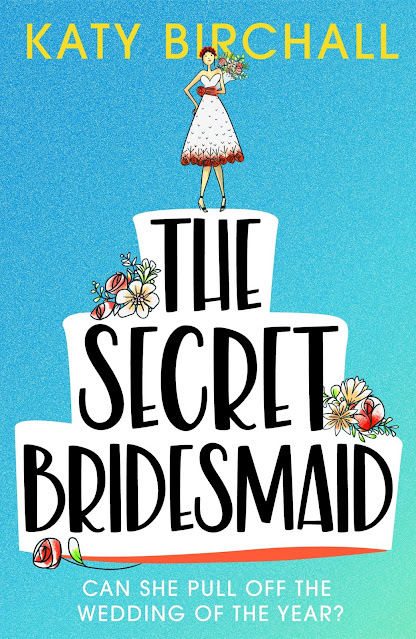 About the book…
The Secret Bridesmaid is a heart-warming and hilarious modern romantic comedy debut that celebrates the joys- and foibles- of weddings, the nuances of female friendship, and the redeeming power of love in its many, unexpected forms. This joyous gem of a book is perfect for fans of Lindsey Kelk, Sophia Money-Coutts and Mhairi McFarlane.

You are cordially invited to the wedding of the year…Sophie Breeze is a brilliant bridesmaid. So brilliant, in fact, that she’s made it her full-time job. As a professional bridesmaid, Sophie is secretly hired by brides to be their right-hand woman, ensuring their big day goes off without a hitch. From wrangling rowdy hen dos to navigating last minute portaloo cancellations, there’s no problem she’ can’t solve. So when she’s employed by an actual Marchioness to help plan the society wedding of the year, it should be a chance for Sophie to prove just how talented she is.

Of course, it’s not ideal that the bride, Cordelia, is rude, difficult and determined to make Sophie’s life a nightmare. It’s also a bit inconvenient when Sophie finds herself drawn to Cordelia’s posh older brother, who is absolutely off limits. And when a rival society wedding is announced, things get even more complicated…Can Sophie pull off the biggest challenge of her career, follow her heart and maintain her reputation – all while keeping her true identity hidden?
Buy Links:

Katy is the author of several young adult novels including The It Girl series, the Hotel Royale series and Morgan Charmley: Teen Witch. She is the co-author of the middle grade Lightning Girl series and Star Switch with Alesha Dixon, and the Find the Girl teen series with YouTube stars Lucy and Lydia Connell. Katy was proud to be the author of a retelling of Jane Austen's Emma for the Awesomely Austen series, a collection of Austen's novels retold for younger readers. She has also written a non-fiction book, How to be a Princess: Real-Life Fairy Tales for Modern Heroines.

Katy lives in London with her partner, Ben, and her rescue dog, Bono.

The Secret Bridesmaid is her adult fiction debut.
Contact Links:

The Secret Bridesmaid is an absolute dream of a book.  Sophie Breeze, is the perfect bridesmaid, she’s the brides best friend in every sense of the word - she’s better than the best wedding planner you can imagine, nothing is too much trouble and she’s the the sort of girl you’d want to have in your corner.
I absolutely lost myself in the magic of this book, the romance, the laughter and at times downright hilarity - it was the best tonic ever.  Nothing is too much trouble, nothing is ever impossible - Sophie is a professional bridesmaid, hand holding the bride and her bridal party throughout the lead up to the wedding and making the impossible, possible.
The story is told as she navigates multiple weddings, never dropping the smile - she has separate Whattsapp groups, one for each of the weddings and we as a reader join her in her wedding planning - she literally never misses a beat and takes the stress out of every wedding, reminding me of a cross between a juggler and a magician - and allowing us the reader to a fly on the wall access to her life via her emails and text messages.
I’d so like to be her best friend and spend an evening in a wine bar with her listening to her tales of the highs and lows of being a professional bridesmaid.  The tears literally slid down my cheeks, I was crying laughing throughout as I read, especially as she accommodated some of the more obscure requests from brides - to - be, slotting into their wedding day seamlessly as if she’d been best friends forever, playing a cameo role in their special day.
I loved Sophie and was cheerleading her on when she was introduced to a particularly difficult bride, the demands were beyond belief and nobody would have blamed her for losing her stack and telling the bride where to get off. Nothing phased her but this particular bride and her family pushed her to the brink of despair - I alternated between being angry and or upset for her.   I loved her dad though, he quietly reminded her of her values and strengths, pushing her gently to step back and evaluate the situation. Giving her the space to take back control.
The Secret Bridesmaid is full of romance obviously, but throughout I was rooting for Sophie to find her own Prince Charming and happy ever after - always the bridesmaid, never the bride! You’ll have to read it to find out if she does. It’s a totally feel good read that melted my heart, made me smile and grin like an idiotic and belly laugh until I cried.  It’s the sort of book that when you pick it up, if you’re feeling a little bit low or the day is drab and grey it won’t be for long - it’ll lift your spirits and brighten your day. I totally recommend The Secret Bridesmaid, I think it’s a book that should be issued on prescription - it was the best lockdown tonic I’ve had
Follow the tour: 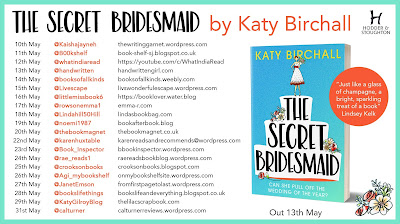