All the Lonely People - Mike Gayle 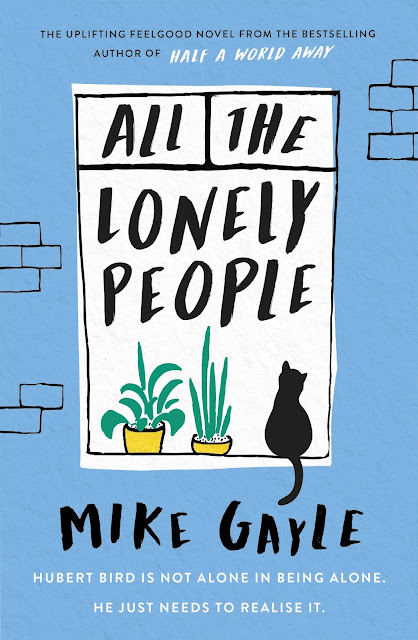 All the Lonely People is by turns a funny and life-affirming meditation on love, race, old age and friendship that will not only charm and uplift, but also remind readers of the power of ordinary people to make an extraordinary difference. Written with Mike’s trademark charm, humour and approachability, All the Lonely People is an intergenerational story of loneliness, friendship and hope, seen through the moving life story of one Windrush-generation elderly man, Hubert Bird.

In weekly phone calls to his daughter in Australia, widower Hubert Bird paints a picture of the perfect retirement, packed with fun, friendship and fulfilment.

But Hubert Bird is lying.

The truth is day after day drags by without him seeing a single soul.

Until, that is, he receives some good news - good news that in one way turns out to be the worst news ever, news that will force him out again, into a world he has long since turned his back on.

Now Hubert faces a seemingly impossible task: to make his real life resemble his fake life before the truth comes out.
Along the way Hubert stumbles across a second chance at love, renews a cherished friendship and finds himself roped into an audacious community scheme that seeks to end loneliness once and for all . . .

Life is certainly beginning to happen to Hubert Bird. But with the origin of his earlier isolation always lurking in the shadows will he ever get to live the life he's pretended to have for so long?

About the author…
Mike Gayle was born and raised in Birmingham. After graduating from Salford University with a degree in Sociology Mike moved to London with ambitions of becoming a music journalist. ... To date Mike is the author of twelve novels including Mr Commitment, Turning Thirty and Wish You Were Here.

My thoughts…
Huge thanks to Jenny Platt at Hodder for introducing me to Hubert Bird.  What an absolutely inspiring character, I couldn’t help but be drawn to him.  He is, on the surface at least, a stereotypical, set in his ways old man but underneath his carapace  is a multi-faceted person who had ‘done good’ despite the challenges that life had through at him.

The story ebbs and flows between Hubert as he is now a widowed, 84 year old, living alone, counting the time until his next phone call from his daughter who’d emigrated to Australia and then back to 1958 when Hubert first arrived in the UK from Jamaica after following his best pal Gus, sold on the idea of a better life.  The reality wasn’t quite the picture that he’d expected, it seemed he had swapped one form of hardship for another and a better life was hard fought.  The West Indian migrants weren’t welcomed by everyone and resentment was high, ignorance gave white, English people the upper hand.

Mike Gayle spins two era’s seamlessly together bringing Hubert to life as we get to know who he is and who he has become.  This is a special book, that pulled at the heart strings - it’s all about family - doing the best for your family and never letting them know you are suffering.  Hubert doesn’t believe in ‘warts and all’ he’s spun a story so vivid to his daughter, he can’t keep up, he struggles to remember what tales he’s told and all because he doesn’t want to be a burden, doesn’t want her to know the hardships he’s suffered or the lonely existence he’s living.

Then she tells him she’s coming home for a visit.  The pace of the book picks up as we walk side by side with Hubert as he tries to construct the lies he’s told into reality before Rose finds out how he’s really living.  Mike Gayle carefully constructed Hubert and it was humbling to watch the real person emerge as the years and layers of thick skin are removed bit by bit until the past meets the present and Hubert can just be, this truly is a poignant read that is very sad in places and difficult to read - loneliness comes in various forms and so does love, family and friendship but only to the degree we allow ourselves.

Hubert’s journey was immense and an absolute pleasure to travel with him.   His story will stay with me for a long time and All the Lonely People is a book that needs more than one reading, a book that should be read slowly to absorb the words and reflect.  To understand why some characters are who they are, life and what it throws at us moulds us as much as the parents and family we come from.  I loved this book, I know it’s one that I will be recommending to everyone. It’s fiction at its best, so much truth wrapped up in the words, if you can imagine it, you believe it and Mike Gayle writes like he’s painting a picture. 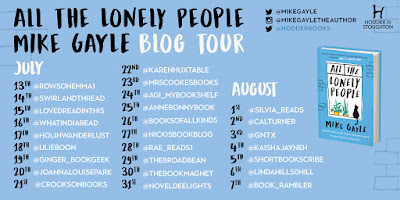