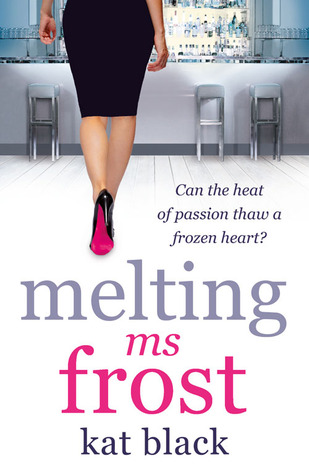 About the book…
How do you thaw the coldest of hearts? Find out in the sexiest romance to hit the shelves this year.

When Aidan Flynn walks into Cluny’s Restaurant, he can’t take his eyes off his new boss, Annabel Frost. With his heart set on winning her over, Aidan can think of nothing but getting beneath her cold exterior.

Known as one of the toughest women in the business, Annabel is impervious to Aidan’s many charms. His compelling grey gaze and persuasive Irish lilt do anything but captivate her.

But Aidan senses there’s more to Annabel than meets the eye. And he’s not going to stop until he reveals all…

A seductive tale that will delight all fans of romance.

Kat Black is the author of prize-winning, pulse-pounding, adult fiction. Born and raised in Australia, Kat was labelled a daydreamer from a young age – but never quite understood why that was considered to be a bad thing.

At eighteen she donned her backpack in typical Aussie fashion and set out to see the world. She got as far as London (her very first port of call) before running into a six-foot-one, solid British obstacle that stopped her in her tracks. Years later she’s still in England, penning steamy tales to help counteract the effects of the infamous weather, and enjoying plenty of adventures with her husband and children.

My thoughts…
This was a book on my really would like to read wish list.  I loved the cover and the blurb so when Leah was looking for someone to read it for a review I jumped at the chance. I wasn’t however, prepared for the amount of erotism.  It wasn’t my usual read and although I enjoyed parts of the book and developed a huge liking for Annabel as she opened up showing her vulnerability which was well hidden behind her frosty nature I wouldn’t be in a hurry to read a book of this genre again.

Frost by name, frost by nature - or is she?

Annabel Frost the manager of the upmarket, London restaurant Cluny’s goes to great lengths to protect herself, she doesn’t want to end up like her mother who trusted and was badly let down by the man in her life.  She let him take control, he cleaned her out and left her with nothing - no self respect, no home, no money.

Just like her name, at work she has perfected and uses a frosty, ice-queen like persona. Terrifying the staff with just a look. She comes across as hard and unapproachable, that is until she meets the new head bar man Aidan Flynn - sparks fly from the very first meeting.

Aiden uses his Irish charm to get under Annabel’s skin - delighting in her discomfort.  He seems to be able to see under the veneer and pecks away at the many layers that mask her character until he eventually gets to the real Annabel. The fact that she threatened him with the sack but never actually followed through gave him encouragement to push her further and further. It’s like a game of cat and mouse.  Just when you think Aiden is going to move in for the kill he allows Annabel  to take some control and backs off.

The sexual chemistry between the two fizzed from almost the first page and it was easy to predict what would eventually happen between Aiden and Annabel, it did however take much longer to reach that point than I thought it would. Kat Black has to be applauded, I could feel the tension crackling between the two at every encounter. Nobody it seems is exactly what you see, the many layers were broken down to reveal two characters whose pasts had shaped their present.

Surprisingly, I enjoyed this book in the end. The beginning of the book was quite a shocker - as probably the only female who hasn’t read ’50 Shades of Grey’ I was quite un - prepared for the erotism. But, it was lovely to see Annabel eventually give her trust to someone. A very well - written book which if ‘romantic erotica’ is your thing I’d highly recommend you read.