Either Side of Midnight - Tori de Clare 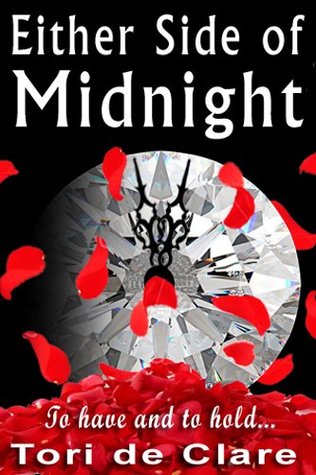 About the book…
WHAT IF THE BEST DAY OF YOUR LIFE TURNED INTO YOUR WORST NIGHTMARE?  When nineteen year old Naomi Stone is snatched from her husband at knifepoint on the night of their wedding and taken to a deserted cemetery, she knows her life is finished.  Drugged and dis-orientated, she loses consciousness as she lies in an open grave with a gun to her head.  But the following day,she mysteriously awakes to find herself unharmed and secured to a bed. She's in a beautiful bedroom in a secluded cottage in open countryside. Only one person knows she's there - the man in the balaclava who's holding her, feeding her, revealing nothing. Naomi senses the unfolding of a plan. She should be on honeymoon in the Caribbean.  Instead, she's trapped with an emotionless psycho with no hope of escape.... And his voice is chillingly familiar.  Who is he?  What does he want? What's happened to her husband? Where is she? Will anyone find her before it's too late?

About the author…
Tori de Clare, born 1970, grew up in Greater Manchester. Having taught piano for 25 years in between being a full-time stay-at-home mum of four, she began writing almost five years ago. Having worked with children and young people for so long, it seemed natural to write for that audience. Her debut novel, Either Side of Midnight, was intended for young adults, but has been widely accepted by an adult readership also. She intended it to be the kind of novel that could be enjoyed by almost anyone. She now lives in East Yorkshire and continues to teach music and write books and finds time for little else beyond family. Daughter of two pianists, it was hardly a surprise that music became Tori's career.

Tori de Clare: 'Both my parents were good at two things: music and writing. Those two things run strongly in our family. My dad died when I was 18. In his spare time, he never had a book out of his hands and aspired to having a book of his own published. Having never had the chance to realise his dream, this book is dedicated to him and to my mum who taught me to play the piano.'

Tori's next book (already written) will be the start of a YA paranormal suspense series due to be released in the near future.

My thoughts…
Having read a few good reviews about this book I decided to download it to my kindle and give it a go! Am I glad I did? The book starts just in the evening after the wedding of Naomi and Nathan and moves quickly forward in a way that was totally unexpected - so much so within the first couple of chapters my heart was pounding and I was thinking 'oh no what have I started'. But, if I start a book I have to finish it.  For a time I did think this was going to be just too much for me.

Tori then managed to seamlessly switch both time and genre. We went back twelve months and was introduced to the main characters and a love affair began.  Tori really is a brilliant author she switched back and forth between times until the past caught up with the present - leaving me alternating between heart pounding and fear and laughing and even crying.

This book has everything. It's not just a psychological thriller/mystery but a very insightful book. Things are hardly ever what they seem. Sibling rivalry, doting dad and what seems to be an over protective mother - but is she, or is she she a typical intuitive mother?  Just when I thought I had the plot all sewn up, I reached 60 % on my kindle and it was all blown apart - what a twist.  Tori had me guessing right up until almost the last page. I was repeatedly dragged out of my comfort zone back into the heart pounding - breath holding - silent pleading - fingers crossing world that Naomi had been dragged into.

I highly, highly recommend you give this book a go, you won't be disappointed and a sequel is soon to follow.