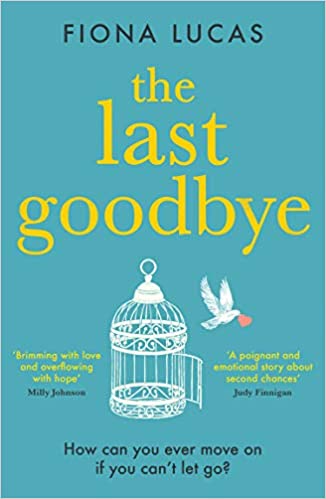 How can you ever move on, if you can’t let go?

‘A gorgeous book about second-chances, brimming with love and overflowing with hope’ Milly Johnson

A beautiful and poignant story of love, loss and finding hope where you least expect it, perfect for fans of Jojo Moyes and Cecelia Ahern.

Anna’s world was shattered three years ago when her husband Spencer was killed in a tragic accident. Her friends and family think it’s time she moved on, but how can she when she’s lost her soulmate?

On New Year’s Eve, Anna calls Spencer’s old phone just to hear his voicemail greeting. But to her surprise someone picks up. Brody answers and is the first person who truly understands what Anna is going through. As they begin to speak regularly, Anna finds herself opening up and slowly she discovers how to smile again, how to laugh, even how to hope.

But Brody hasn’t been entirely honest with Anna. Will his secret threaten everything, just as it seems she might find the courage to love again?

Buy Links:
About the author…

Fiona Lucas is an award-winning author of contemporary women's fiction. The Last Goodbye is her first novel written under this name, but she's been writing heartwarming love stories and feel-good women's fiction as Fiona Harper for more than a decade.

During her career, she's won numerous awards, including a Romantic Novel Award in 2018, and chalked up a no.1 Kindle bestseller. Fiona lives in London with her husband and two daughters.
Contact Links:

Awwww, where to start with this one.  As the title would suggest The Last Goodbye is sad, poignant and heartfelt.  It’s an emotive read that Fiona Lucas has beautifully written, I broke my heart and sobbed throughout great chunks of the book - which is a huge testament to the writing.  I felt so engaged I could have been reading about a friend, not fictional characters in a novel.
The Last Goodbye centres around the fragility of the central character Anna as she navigates a different path to the one she had mapped out with husband Spencer, who was tragically killed in an accident three years previous.
Her grief and sense of loss was utterly palpable, as a reader I felt, not just for her, but for her friends and family; all of which were doing their best to give her a reason to cling on, encouraging her in different ways to take a hold of her life and start to live again, something Anna is totally opposed to - the guilt she feels for being alive when Spencer isn’t, is very real and  moving.
The ripple effect of death travels wide, affecting not just Anna, her family and friends but also that of Spencer’s family and friends too.   Anna and Spencer’s family regularly meet for Sunday lunch where the author serves up grief on a platter for all to see and some of it is not palatable, but again sadly so very true.  Everyone is affected by grief differently and Anna’s struggles to have a voice and find a place in the family as a daughter-in-law without Spencer by her side are particularly sad chapters to read.
When Anna is feeling particularly low she calls Spencers phone to listen to his answerphone message, she just wants to hear his voice and pretend for that few seconds it’s all a dream, he’s not really dead.  This is something that she needs to do but it makes her feel worse when he never picks up, he doesn’t answer until one day there is an answer.   It was at this point I had a near heart attack, as did she!  How could that be possible? All becomes apparent when she calls again, it isn’t Spencer at all - his number has been given to someone else,  a man called Brody.
As the book progresses Anna finds herself calling Brody whenever she is low, she found pouring her grief to a faceless person easier than to those close to her. I loved how the author described these interactions, the distance and anonymity allowed Anna to verbalise her grief and gain impartial, non judgmental insight into how she could possibly move forward.  I loved the friendship and connection that developed through these late night calls.  Brody finding he needed them as much as Anna.
There isn’t a template for grief, there isn’t a time frame but there seems to be a process and Fiona Lucas walked us through it admirably, highlighting the different needs and emotions for all of the characters. I came to love Brody as much as Anna, and wanted to know his background too, as his story unfolded I cried buckets - how could he help Anna so much with what he was going through too. The Last Goodbye was sensitively written, I hung off every chapter, muttering, praying and or crying - this book really should have come with a large box of Kleenex! I was totally captivated, breathless and broken as I walked in the footsteps of Laura, Spencer and Brody. An outstanding read that will stay with me for a long time, a read I have already recommended to so many friends, thank you.
Posted by Crooks on Books at 15:31