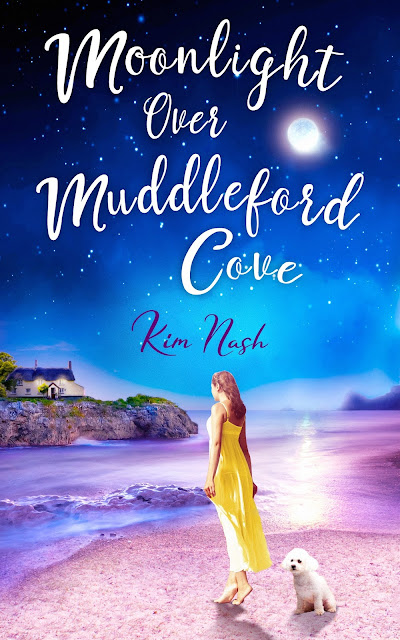 When thirty-four-year-old Nellie Wagstaff loses her job and discovers her fiancé is a cheating scumbag in a single day, she feels like the world has come crashing down. And that’s before the solicitor’s letter, along with a request to visit a place she hasn’t thought about for a very long time.

Heartbroken, Nellie escapes to the beautiful seaside town of Muddleford in Dorset, where she discovers she’s inherited more than she ever bargained for. Nellie never knew why her mother stopped talking to her sister, but now childhood memories of Muddleford come flooding back: long hot summers, the sea glistening beyond the sandy cove... and a stolen kiss with a boy called Jack.

Jack, now a devilishly handsome vet, has the local pet owners swooning over him, and as Nellie and he become close once more, and she gets used to gossiping with the locals and sipping wine at her beach hut with sand between her toes, she’s sure she can feel sparks flying once more. But just as she thinks she might be able to open her heart again, her newest frenemy, the glamourous Natalia, tells her a secret about Jack that changes everything.

Nellie will never know why her mother and aunt parted ways. She’ll sell the house, forget about Jack, and get back to real life. Because there’s nothing for her in Muddleford... is there?

An utterly uplifting and completely hilarious summer read about learning to trust yourself and of finding love and friendship in the least expected places for fans of Jessica Redland, Heidi Swain and Holly Martin.
Buy Links:
Moonlight Over Muddleford Cove: An absolutely unputdownable feel good romantic comedy
Pre-order:
UK: https://amzn.to/2NXKaJ7
US: https://www.amazon.com/dp/B08VHNLRML
About the author…
Kim Nash is an author of uplifting, funny, heartwarming, feel-good, romantic fiction.

Her latest book, Sunshine and Second Chances, was shortlisted for the 2020 Amazon Kindle Storyteller Award.

She lives in Staffordshire with son Ollie and English Setter Roni, is Head of Publicity for Bookouture and is a book blogger at www.kimthebookworm.co.uk.

Kim won the Romantic Novelists Association's Media Star of the Year in 2016, which she still can't quite believe. She is now quite delighted to be a member of the RNA.

When she's not working or writing, Kim can be found walking her dog, reading, standing on the sidelines of a football pitch cheering on Ollie and binge watching box sets on the TV. She's also quite partial to a spa day and a gin and tonic (not at the same time!) Kim also runs a book club in Cannock, Staffs.

Sign up to be the first to hear about new releases. Your e-mail will not be shared with anyone else and you will only contacted about Kim's books.
https://www.kimthebookworm.co.uk/

Amazing Grace was her debut novel with Hera Books and came out in April 2019.

Escape to Giddywell Grange is Kim's second novel and was published by Hera Books in September 2019.

Sunshine and Second Chances is Kim's third novel and was published in June 2020.

Moonlight over Muddleford Cove, Kim’s fourth novel is available to pre-order now and will be published on 30th March 2021.

Oh my goodness, Moonlight over Muddleford Cove is Kim Nash’ fourth book and equally as dreamlike as each of the others. I was instantly transported into the pages of the book, totally invested in the plot and characters and felt like I was settling down for a catch up with my friends.

Kim writes feel-good, uplifting stories written from the heart that centre around family and friendship and reading one of her books is like taking the best tonic a doctor could ever prescribe. The characters in a Kim Nash novel are diverse and all play an integral part to the plot, she digs below the surface, exposing real people who live their life the way they do because of past events - they're not overly simplistic or too complex and Kim covers emotional, roller coaster moments with tenderness and insight whilst moving the book along at such a pace that the positive moments are the main focus.

Moonlight over Muddleford Cove centres around Nellie, a girl who had it all - that is until her life is turned on its head when she loses both the love of her life, her job and is summoned back to Dorset for a will reading on the death of her Auntie Lil - all in the space of one short week. Nellie plans a quick trip but isn’t prepared for what greets her in Dorset.

You can’t help but feel for Nellie, she’s fragile and returning to Dorset means facing her past, what she doesn’t expect is quite what an emotional trip it turns out to be and finding herself the beneficiary of her Aunts estate means there’s decisions to be made. Dorset holds memories both good and bad and she’s not sure it’s a place she wants to be until childhood pal and ex boyfriend Jack enters stage left! Drool, drool!! There’s also Norman, adored by her Aunt but someone Nellie didn’t even know about, she’s not sure how she feels about that but upon meeting him becomes equally as attached and takes him straight to her heart, just as her aunt did.  In fact it’s Norman that is the catalyst for a lot of decisions Nellie makes about her future.

I loved how her friendship with Jack reverted back to their youth, their easy camaraderie and ease with each other but, there’s one problem they are both different people now and Jack is not a free agent, something he doesn’t seem to be all that clear about, this is something that causes turmoil for Nellie. She has settled into the community, loves the beach which gives her space to walk and think but not everyone is making her feel welcome! Should she pack up and return to the Midlands, the emotional juggling bounced off the pages.

The turmoil and emotions were realistic to read, Kim took us on a rollercoaster of a ride as we lived the highs and lows of Nellies life. The hurt and anguish tempered with fun, laughter and humour. The highs and lows of the life changing decisions she had to make. Love and friendship outshining the greyer moments.

It was a book I didn’t want to end and another book that had me reaching for the brochures. Oh, to rent a cottage on the beach, to sit and drink fizz watching the sunset from a beach hut - to be part of a community that once they’ve took you under their wings always had your back would be just amazing. Kim you are both a travel agent and an estate agents dream - your descriptions sell locations, the pictures in my mind clearer than any image in a brochure I’ve ever flicked through.

I have no hesitation recommending Moonlight over Muddleford Cove or any of Kim’s previous three novels for that matter. Within pages of opening any of Kim’s books I guarantee you will be totally invested into the lives of all the characters, you’ll feel the tension of your everyday life unfurl as you virtually join the characters on their journey and settle into the easy comradeship of long established friendships, sharing secrets, giving and taking advice and will forget that these are not your real friends but characters in a book. Kim not only creates strong, lead characters but also necessary, believable, supporting characters that add depth to every story.

She really knows how to give you a little bit of everything, her books will make you smile, at times laugh out loud, there are tender moments and some hard hitting scenarios too. But one thing that is common with each is that feeling of sadness as you reach the last few pages, not wanting the story to end, the wanting to go straight back to the beginning after you’ve turned the final page so you can re-live it all again. Oh and I forgot to mention, there’s usually a hunk or two to drool over too!