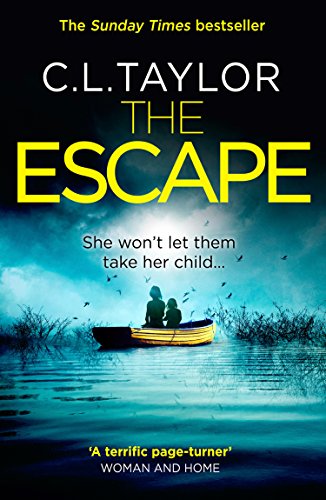 About the book…
The new psychological thriller from the Sunday Times bestselling author of The Accident, The Lie and The Missing.
"Look after your daughter's things. And your daughter…"
When a stranger asks Jo Blackmore for a lift she says yes, then swiftly wishes she hadn't.
The stranger knows Jo's name, she knows her husband Max and she's got a glove belonging to Jo's two year old daughter Elise.
What begins with a subtle threat swiftly turns into a nightmare as the police, social services and even Jo's own husband turn against her.
No one believes that Elise is in danger. But Jo knows there's only one way to keep her child safe – RUN.
Buy Links:
About the author…
C.L. Taylor lives in Bristol with her partner and young son. She started writing fiction in 2005 and her short stories have won several awards and been published by a variety of literary and women’s magazines. Cally has a degree in Psychology, with particular interest in abnormal and criminal Psychology. She also loves knitting, Dr Who, Sherlock, Great British Bake Off and Margaret Atwood and blames Roald Dahl's Tales of the Unexpected for her love of a dark tale.

Her dark psychological thriller THE ACCIDENT was published in the UK by Avon HarperCollins in April 2014 and as BEFORE I WAKE in the US in June 2014 by Sourcebooks.

Her second psychological thriller THE LIE was published in the UK in April 2015. It became a Sunday Times bestseller and hit the #1 slots on Amazon, Kobo, iBooks, Google Play and Sainsbury ebooks. It will be published in the US in June 2016.

CL's third psychological thriller THE MISSING was published in April 2016 and was another Sunday Times and ebook bestseller.
Contact Links:
www.twitter.com/callytaylor
www.instagram.com/CLTaylorAuthor
www.facebook.com/CallyTaylorAuthor
My thoughts…
I was given a copy of C. L. Taylor's latest book The Escape in exchange for an honest review, something I am more than happy to provide.

I have read all of Cally's books and the time in-between finishing one and the next being published is torturous. She is an author that gets inside your mind with characters that are engaging and demand to be heard.

The Escape was a book that I flew through, I lost all sense of time as I flicked through the pages at a rate of knots as the lives of Max and Jo Blackmore and their daughter Elise unravelled.

They are a family that are no strangers to heartbreak and tragedy having lost their first child Henry, their second chance with daughter Elise should be glue that holds them together when in actual fact the very fabric of their family is fractured. Both trying to live their lives together but, are in fact; very much apart. Living lives with increasing difficulty by Max and his job as an investigative journalist and Jo with her panic attacks and agoraphobia.

To say this was an intense, fast paced read would be an understatement.  I picked this book up and literally didn't put it down until I had read the very last page.  Jo is living a manic existence and her life finally starts to unravel after reluctantly offering - though offer wouldn't really be the right way to describe the situation, a stranger a lift.   She finds herself racing against the clock to pick her daughter up from nursery and in a situation she clearly doesn't feel comfortable in - reluctantly agreeing to giving a lift to a person who once in the car - makes threats and demands of Jo, telling her to keep her daughter safe and telling her to pass a message to her husband Max telling him to return what he took!

The sheer desperation of Jo as she struggles to understand the situation she finds herself in leaps off the page and she appears to be slowly going mad.  There are so many twists and turns I couldn't decide who to trust and see-sawed back and forth trying to decide who was on Jo's side and who was double crossing her.

A mother will go to any lengths to protect her child and Jo's ability to do just that is stretched beyond belief.  Cally Taylor is an author with huge insight and attention to detail,  She has a writing style that is dark and twisted yet demonstrates an insight into the complex psyche of people and situations that makes every chapter plausible and real.

My heart literally broke in two whilst reading this book, the pain and shear desperation shone through this novel as true stories both past and present became apparent.

I highly recommend this book to all readers of psychological thrillers who will appreciate the sharp eagle eye of an author who is going from strength t strength with each book published.  I lent this book to a friend before I read it and a couple of days later burst through my front door hardly able to speak ' this is book of the year, you have to read this now!'.  Gill, I have to agree an easy five stars from me!
Posted by Crooks on Books at 21:51