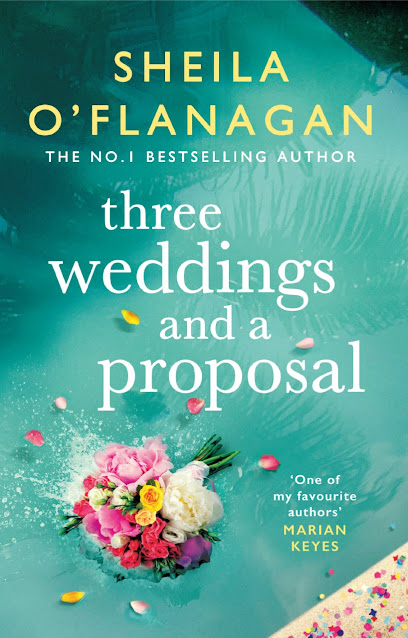 About the book…
At the first wedding, there's a shock

The second wedding is unexpected

By the third, Delphie thinks nothing could surprise her. But she's wrong . . .

Delphie is enjoying her brother's wedding. Her surprise last-minute Plus One has stunned her family - and it's also stopped any of them asking again why she's still single. But when she sees all the missed calls that evening, she knows it can't be good news. And she's right.

Delphie has been living her best life, loving her job, her friends, her no-strings relationships and her dream house by the sea. Now she has to question everything she believed about who she is and what she wants. Is her mum right - is it time to settle down? Or does she want to keep on trying to have it all?

Each wedding of a glorious summer brings a new surprise. And as everything Delphie thought she had is threatened, she has the chance to reshape her future . . .
Buy Links:

About the author…
As you can see, a Dubliner all my life. My parents owned a grocery shop in the Iveagh Markets, in the Liberties area of the city and I guess city blood runs through my veins.

As a child I enjoyed reading and telling stories and everyone thought that I end up in a job which had something to do with books and literature. But though I applied for a job in the library all of the job offers I got were in commerce.

I turned down lots of them before my mother accepted one for me (I was on holiday at the time). It was in the Central Bank of Ireland and that’s how my career in financial services began.

I started out in administration and then moved jobs until finally I was working as a dealer in a commercial bank. Eventually I was promoted to Chief Dealer (the first female CD in the country). I traded lots of different things – foreign exchange, swaps, options, bondsâ€¦all of the kind of things you read about in the papers and that sound very technical and difficult. Of course once you’re doing it, it’s not half as technical as it sounds.

But I still loved reading and writing (which I did in my spare time) and I desperately wanted to write my own book. I guess I never quite got over the fact that I was never offered the library job! In my thirties I decided that it was now or never and I sat down, stuck Chapter 1 on a page, and started. I wrote the whole thing before sending it off.

I was offered a publishing deal (with no advance) by an Irish company but only if I wrote a different book! So back to the drawing board, I started again. It was another two years before it was published. It wasn’t until I’d written a few books and was offered a contract (this time with an advance!) from another publisher that I felt able to give up my trading job and write full time. So, even though it took a long time, I eventually realised my dream of being a full-time writer.

And now I also write a business column for the Irish Times.

When I’m writing a book I want to do three things:

I don’t write for any particular audience but I suppose I must have people like me in mind – people who have busy lives and who like to escape into someone else’s for a while.

I love writing books. I hope you enjoy reading them
Contact Links:
Visit: Sheila O'Flanagans Website
or follow on twitter @sheilaoflanagan
My thoughts…
I've always been a fan of chic lit / women’s fiction, using it as an antidote to my other favourite genre - psychological thrillers or for reading at times when there's too much going on in my life and I'm looking for a comfort read. Sheila O'Flanagan has always been included in what I call my 'comfort blanket' authors. I know whenever I pick up one of her novels I'm going to get a read that touches on real life issues, sucks you into family dynamics, will have me muttering out loud and then cheering from the sidelines in equal measures but, invariably turns out to have a happy ending. I love that Sheila writes - a real feel good book thats not all pink and fluffy - there’s some genuine family life, heartaches and twists thrown in, just like in real life.
Three Weddings and a Proposal centres on Delphie as she lives her best life, happy, single and where she wants to be - the opposite of where her entire family think she should be. The story begins as Delphie’s brother is due to get married and her family are pressuring her to name her plus one for the weekend - her usual male friends are all either married, moved away or not available, she’s thinking of going alone when she makes a chance reconnection with an ex- boyfriend Ed, on a flight home from a work meeting with her boss in Spain.  He’s the one that got away, but he was a good friend once.
The family are ecstatic to hear about her choice of plus one and welcome him back into the fold as if he’s never been away, as if he wasn’t the cause of Delhie’s heartache so many years before.  No matter how much she tells them he’s only a friend they see more.  A call during the wedding reception telling Delphie of the sudden death of her boss sees her go into free fall and her whole life pivot on its axis.

This book focuses on family dynamics, sibling rivalry along with honesty, trust and communication and taking chances. Delphie needs her friends and family more than ever, and when Conrad dies she’s unwittingly finds herself the central focus of a family that has never really understood her attachment to work and single life. The bantering and opinions of the family thrust upon her from all angles was so typical of any large family, each vying for airspace when what Delphie needed and wanted was quiet and space to think - she’d lost not just a good friend in her boss but her job and her life. I think Sheila's descriptions are particularly vivid. I could visualise each of the family as clearly as if she was describing people I knew and could see that Delphie just needed time to come to terms to her situation and assess her options - she’s a strong, bold character and no walkover but her edges are not all sharp and angular, she has a very caring side and is loyal to those around her to the end.

This story demonstrates how at certain times in our life, when we’re dealt a poor hand we have a choice. sink or swim, thinking with your head or heart is not enough, usually your gut instinct is the right one and that it’s ok to accept support and friendship whilst you pick yourself up but should then be given the space to make your own decisions. As in this book, time, quiet and space will usually allow for balanced decisions - none of us benefit from being told what to do. I felt an emotional attachment to Delphie and rooted for her throughout, her voice wasn’t loud enough to fight for her life choices at times, drowned out by the white noise around her but she is a strong character and I willed her to take back control which she does with panache. I particularly loved that the lead character wasn’t a damsel in distress type but was comfortable in herself and prepared to stand by her convictions.
An absolutely wonderful read, that is uplifting, heart warming and hopeful - Sheila O’Flanaghan never disappoints - the bar is raised a little higher with each new book and she sails across it every time.  The romance is heartfelt, the friendships strong and the family loyal to the last.
Follow the tour: 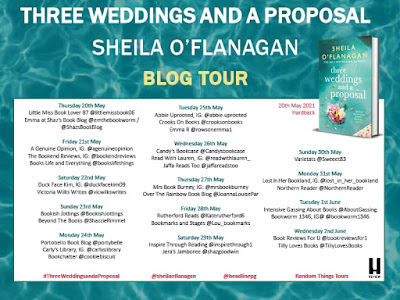