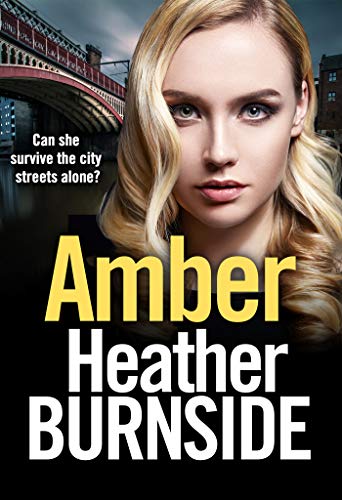 With a mother unfit for purpose and a brother who despises her, working girl Amber can rely on no one but herself – until the meanest pimp in Manchester, Kev Pike, offers her his protection. Unfortunately, this attracts the fury of Cora, a prostitute no one wants to get on the wrong side of...

When Cora is found strangled to death, the late-night city streets feel increasingly exposed with a killer on the loose. And as Amber grows closer to Kev, she realises his security comes at a price she might not be willing to pay...

Amber is frozen in fear, knowing one wrong move will risk her life. But then she discovers a horrifying secret that forces her to choose: stay or run?

Heather Burnside is back with this breath-taking, heart-racing series, perfect for all fans of Kimberley Chambers and Martina Cole.

Buy Links:
About the author…
Heather Burnside grew up in Gorton, a working-class area of Manchester famed as the original location for the TV series, Shameless. She moved from Gorton to a new housing development and spent her teenage years on one of the toughest estates in Manchester.

During the 1990s the estate became the headquarters for one of Manchester’s predominant gangs. It regularly featured in the local press due to shootings and drug-related problems. Heather draws heavily on this background as the setting for many of her novels.

After taking a career break to raise two children Heather enrolled on a creative writing course. During that time she had many articles published in well-known magazines and went on to run a writing services business before focusing on her novels.

Heather now works full-time on her novels from her home in Manchester which she shares with her two grown-up children.
Contact Links:
Website: www.heatherburnside.com
My thoughts ...

Amber is book four in the Working Girls series written by Heather Burnside.  The story centres around Amber a prostitute and begins in 2015 as she meets up with a regular client, he likes her to dress up for him.  She tries to detach herself, and remove herself virtually from the room but finds herself slowly weeping as she is transported back to her childhood, a time of hardship and trauma that no child should endure.  She had friends and was - living a life far removed from the life she’s living now, living a life as Amy, happy with her friends, loved by her grandparents until her mothers debts and lifestyle forced their move to a life that would forever haunt her.
I began reading this book and found I couldn’t concentrate, the story and content was edgy, blunt and in your face and to say I found it difficult reading would be an understatement.  It didn’t matter how quickly I read I couldn’t escape the horrific details spilling from the pages at the heart of the story.  Don’t get me wrong the skill of the author is testament to how reading the book made me feel uncomfortable and pushed me way outside of my comfort zone, this wasn’t a wishy washy water colour it was a full blown oil painting in all it’s colourful glory.  The story switches back and forth between Amy’s childhood and Ambers life, setting the scene as to how and why Amy became Amber.  The more I read the more I desperately wanted to escape the imagery conjured by the words until I couldn’t cope anymore.
This is my first read of Heather Burnside and it’s clear that this book is more than words on paper, she depicts the characters and scenarios with a clarity that is raw and unfiltered. I found it difficult to compartmentalise fact from fiction, such is Heathers skill and style of writing. Every word is like a true account totally mesmerising and compelling. Every word is like a true account totally mesmerising and compelling and the research it must have took to craft such a book is evident.
It’s going to take a lot to push this novel from my memory and think I need to read something uplifting and light as an antidote, I recommend this book to all readers who love crime thrillers that are a bit too real for comfort.
Follow the tour: 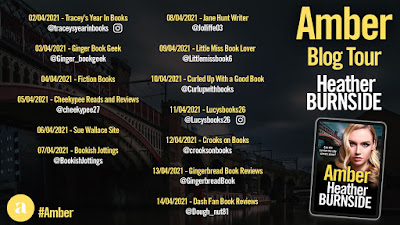