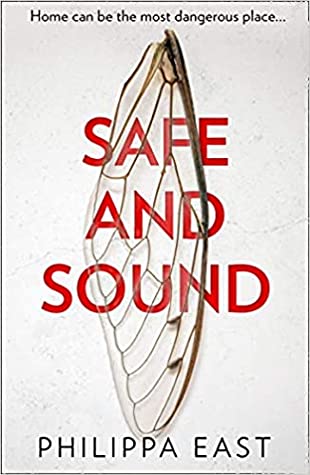 About the book…
Home can be the most dangerous place…

In a small London bedsit, a radio is playing. A small dining table is set for three, and curled up on the sofa is a body…

Jenn is the one who discovers the woman, along with the bailiffs. All indications suggest that the tenant – Sarah Jones – was pretty, charismatic and full of life.

So how is it possible that her body has lain undiscovered for ten whole months?
Buy Links:

About the author…
Philippa East grew up in Scotland before moving to Oxford and then London to train as a Clinical Psychologist.
A few years ago, Philippa left the NHS to set up her own part-time practice and dedicate more hours to writing. The result was her debut novel LITTLE WHITE LIES, published by HQ/HarperCollins in 2020.

Philippa now lives in the beautiful Lincolnshire countryside with her husband and cat. She loves reading (of course!) and long country walks, and she also performs in a local folk duo called The Miracle Cure. Alongside her writing, Philippa continues to work as a psychologist and therapist.
Contact Links:
Twitter: @philippa_east
My thoughts…
I read Philippa East’s debut novel Little White Lies with our book club last year and was bowled over, it was a desperately sad, yet a compelling read that was shocking and at times, an uncomfortable read that gripped from the start.  As soon as I heard she had a second novel coming out I was desperate to get my hands on a copy and read.
Safe and Sound didn’t let me down, I was intrigued and compelled to read from the very first pages.  The story centres around Jenn who is clearly a devoted mum to son Charlie and is efficient and organised in her job at a housing association. Or is she as together as she’s trying to portray?! Something is ‘off’’ about her from the very beginning and on finding a tenant dead in a flat she was responsible for we see Jenn begin to un-ravel.
The tenant Sarah Jones is dead and has been for some time, Jenn is clearly distressed, the anguish drips from the page - an awful scenario to be in but intensified because she believes she is partly to blame, she missed a routine flat inspection..... !
A chance email sends Jenn on a journey that will push her to the edge of reason as she begins an unhealthy obsession with finding out Sarah's past! She also appears to have an obsessional relationship with her son and a distant relationship with her parents - the author alludes to something that’s happened In the past but what.....?  Every page I turned created questions, and then I was sent backwards in time to read about a family who have a daughter Prinn whose cousin comes to stay with them for the Summer - not an usual occurrence for them and with no explanation as to why now. A situation that felt odd from the start.  Safe and Sound tracks back and forth between then and now with no clear correlation about why we are being told the story from the past - my brain was bombarded with questions, second guessing what I thought might be going on.  The more I read the more anxious I felt - more than one of the characters was clearly suffering with mental health issues and there was huge amounts of un-written story that just felt off! I felt in a permanent state nervousness and anxiety, finding myself second guessing every single characters reasons and motives.
With Safe and Sound there is no time to absorb the story, my head was a whirl as the author dropped details like grenades one after the other onto the pages - reading it was like unravelling the worst ball of string you’ve ever come across.  It took me up blind allies, second guessing and making assumptions, my heart pounding with fear and anxiety that when the strands were laid flat and the facts slotted into place I had to take a moment.
Such a cleverly plotted narrative that sensitively dealt with the reality and fragility of mental health, the obsessive behaviour and blindness to reality.  The inability to see, to share and divulge, the inner voice and paranoia that walked a fine line between ‘make-believe’ and ‘reality, for both Jenn and Sarah.  The need to see and listen on a deeper level.  If something feels off it probably is, not to just accept everything at face value, sometimes it’s good to question.  This really was an outstanding read that delivered everything I hoped for and more.  Tense, dark, gripping and original another book I’ll be recommending to everyone I know.
Follow the tour: