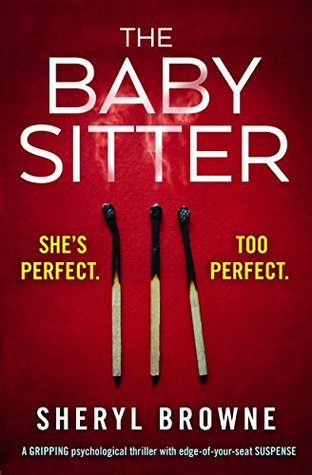 The Babysitter: A gripping psychological thriller with edge of your seat suspense

Mark and Melissa Cain are thrilled to have found Jade, a babysitter who is brilliant with their young children. Having seen her own house burn to the ground, Jade needs them as much as they need her. Moving Jade into the family home can only be a good thing, can’t it?

As Mark works long hours as a police officer and Melissa struggles with running a business, the family become ever more reliant on their babysitter, who is only too happy to help. And as Melissa begins to slip into depression, it’s Jade who is left picking up the pieces.

But Mark soon notices things aren’t quite as they seem. Things at home feel wrong, and as Mark begins to investigate their seemingly perfect sitter, what he discovers shocks him to his core. He’s met Jade before. And now he suspects he might know what she wants …

Mark is in a race against time to protect his family. But what will he find as he goes back to his family home?

If you loved reading The Girl on the Train, Behind Closed Doors and The Sister, you’ll love the suspense of The Babysitter. This unputdownable read will have you turning the pages until way after dark.

Sheryl Browne brings you powerful psychological thriller and contemporary fiction. SheryI’s latest psychological thriller THE BABYSITTER – the first of a three-book deal – comes to you from fabulous BOOKOUTURE. A member of the Crime Writers’ Association and the Romantic Novelists’ Association, and previously writing for award winning Choc Lit, Sheryl has several books published and two short stories in Birmingham City University anthologies, where she completed her MA in Creative Writing.

So why does Sheryl write in two genres? Quoting E. L. Doctorow, Sheryl says: “Writing a novel is like driving a car at night. You can only see as far as your headlights…” This she thinks sums up a writer’s journey, you never quite know where you are going until you get there. You might start with an outline, but a strong character will always divert from the plot. If Sheryl’s not sure where a character is going, she simply has to trust him to show her the way. Plus, according to one reviewer, she also has a scary insight into the mind of a psychopath.

My thoughts…
I was given an ecopy of this book by Kim at Bookouture, Sheryl's publishers; in exchange for an honest review.  This is something I'm more than happy to do.

It is no secret that I love Sheryl's writing, she has the ability to shock me and then some - each book leaving me with palpitations and an after-shock.  This book was slightly different in that the horror and destruction that comes into the lives of Melissa and Mark and their children Poppy and baby Evie comes from within.

Meet Jade, homeless after a house fire she is rescued by Mark and invited into their home.  She is gorgeous, kind and very soon becomes an invaluable help to the family before taking on a role as a full-time, live in babysitter.  But.......she's a little to wholesome to be true and manages to unravel the tight knit family as easy as dropping a ball of wool.

This was a book that had me cussing and cursing, silently berating and muttering throughout - it was scarily frightening how easy their lives fell apart, doubting each other and second guessing their own sanity.  With Mark grateful that his children had got the love and care of Jade, 'the babysitter' as his wife loses the ability to function and care for her family or herself.  If only he knew.......I repeatedly wanted to shake him, wanting him to see what was happening around him.  The pressures of his job as a detective and his home-life meant he took his eye off the ball allowing Jade a way in!

Jade played them both, in a sickly twisted way.  I felt helpless and disgusted as Sheryl took me on an uncomfortable, voyeuristic journey as she allowed Jade to systematically chip away at Melissa's and Mark's life.

I don't think I've read a book in such a long time where I've disliked a character quite so much, Jade has a pure evil centre wrapped in a delicious coating. This is a book that built momentum, I found myself reading quicker wanting to get to the end in order to stop the torment. To watch the happy, connected family become separate entities unable to function in their rightful way was painful.  A sickenly, twisted story that has reality at the heart of it.  I always take people at face value - I'm now thinking there's a lot to be said for those that save judgement.

Thank you so much Sheryl for writing another totally absorbing read that fully engaged my vivid imagination and sense of judgement - a story that shook my values to the core,
Posted by Crooks on Books at 19:24